Guess what, guys! I finally got the computer to myself, which means a post! A real actual post! *claps wildly* Now, I’ve been busy in the last few weeks. What with finishing up school last week, as well as extracurricular activities and resisting procrastination, my imagination has been at an all-time low so far this year. But now that it’s actually summer, I can post!

Now, one of the things I’ve been working on is this blanket (readers ooh and aah) and it took me about three weeks in total to crochet. For this, I used Bernat Baby Sport yarn and a size G hook. The pattern is of my own invention, so I don’t think I’ll be posting it. As you can see, there are a lot of color changes in the yarn, so it’s not too bland and boring. My camera makes the yellow look brighter than it actually is. In reality, the yellow is more of a baby pastelly yellow, not the egg-yolk-yellow it is here. And there’s a bit more pink, too.

You can’t see it very well (blame the crappy camera) but the blanket is about 25″ long and 19″ wide. I’m working on another blanket that, if all goes as planned, will be at least 26″ by 26″. 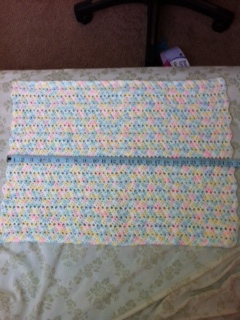 Here’s another picture of the blanket with a measuring tape for scale.

And one of the blanket all folded up, with a cute sewn bear on top. As stated in previous posts, these items were made for a library program named Giveback held at the Bloomingdale library in Florida, not the one in Illinois. Cute, no? 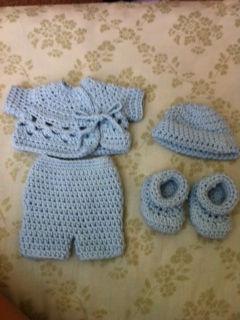 And I made more baby sets! Isn’t this one pretty? I used some baby cotton yarn (about 200 yards) for this set, and I ended up with a itty bitty foot of yarn left when it was done.

I used the same pattern as before to create this jacket, but I altered it slightly so that it would open down the side. I think it looks nice. I used three granny square ‘rows’ for the body of the jacket, and single-crocheted all around the perimeter of the piece, with a few chain stitches to act as ‘buttonholes’. These buttonholes would later be tied closed by a bit of chain stitches. The pants were made using the same pattern as before, although instead of knitting ribbing, I crocheted 3 rows of sc before starting in on the hdc. There was a lot of unraveling with these pants. They were quite frustrating to make. 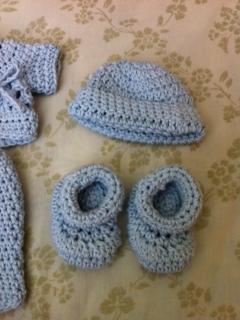 As always, the booties are made using a slightly modified version of the Roll-tops pattern and the hat was improvised. I don’t know why, but I just can’t stick to a hat pattern. I’ll find one that looks good, then after a few rows I’ll start wildly improvising. So, my hats always end up slightly differing from each other. It’s quite frustrating, actually.

Now, on to new news!

I have recently discovered the awesomeness that is cro-tatting! Here are some pictures of it, and here is a tutorial if you’re interested. Basically, what it is is you make lace by looping thread or yarn over a crochet hook. It’s really easy, if you’ve crocheted before. So anyway, I wanted to make something smaller and more intricate, and it didn’t help that I found a very small amount of crotat patterns on the Web. By Googling and reading forums, I stumbled across needle tatting! It’s just like crotatting, only there’s more patterns, more techniques, and more resources to learn from! So, I bought two 5″ doll needles from Joann’s, nice multicolored size 10 crochet thread, and made the flower below!

See? Pretty! I also made a bookmark a week ago, with pictures to come soon. 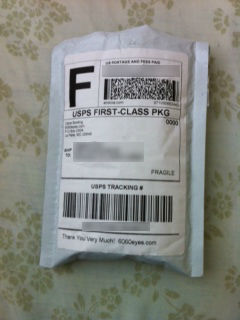 I recently received a package in the mail. See? When I opened it, it turned out to be my safety eyes and noses that I ordered off Etsy! You should go check out 6060’s store, she’s got a lot of nice stuff.

So anyway, I opened the package and here are the contents! The top bag contains 25 pairs of 9mm eyes, and the bottom bag contains 8 9mm triangle noses! I’ve got some crocheting to do… 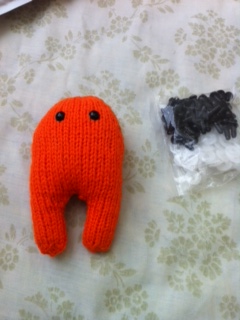 And right here is a monster I made using the 9mm eyes! It’s pretty. I used Red Heart bright orange acrylic yarn and some dpns which I do not have on hand, so I couldn’t tell you the size. This was an improvised pattern, so it’s not gonna be published. I think I might add arms someday, but for now the unnamed and ungendered orange monster is perfectly fine with eyes and legs.