Hello, readers! What have I been doing these past few days? Stuff. Lots of stuff. Want to see? *readers shake their heads vigorously* OK! *completely ignoring the negative head-shaking* I’ve been making these.

First up is this chibi I’ve named ‘Emmykins’. Emkho of Trees and Sunshine fame was the one to design this chibi. It’s supposed to be her in real life. 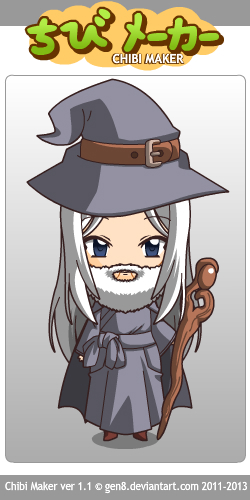 This one, obviously, is Gandalf the Grey. I couldn’t find a good, long, Gandalf-esque beard for him, so he gets this one. And I didn’t know what color his eyes were and I was too lazy to Google it, so he gets navy blue. Making him was sort of boring. You just had to pick grey and grey and more grey, didn’t you, Gandalf?

This is Hermione in full Yule Ball regalia. I couldn’t find a nice flower necklace like the one she has in the movie, so I put strings of beads on her instead. And I made her hold a rose. I think she’s adorable. And I know her eyes are brown, but blue looked better.

This one is a self-portrait of Fexnox. It was designed by him. He looks sort of like a gnome/karate teacher/Santa thing.

It was actually quite fun to do this one. I was playing this song and it was late at night. I creeped myself out pretty thoroughly.

And this is the ever-changing Nymphadora Tonks. Call her Tonks because she detests her first name. Seriously, what were her parents thinking when they chose ‘Nymphadora’? I put an octopus on her head because that’s exactly what she would do. Conjure an octopus and stick it to her head. And I made her hold fire. I don’t know why. Really though, if you watch Professor Lupin on the train in the third film, you’ll see him hold blue flames in his hand.

And that’s all I’ve get for you today. I’m working on some Harry Potter and Doctor Who things that should be up in a few days. I just have to watermark them first. If you want to make a chibi of your own, HERE’S THE LINK.