Currently, my favorite book would be The Phantom Tollbooth by Norton Juster. 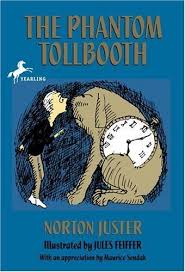 The word play in it is hilarious–The Whether Man, Dictionopolis, the Mountains of Ignorance, and a watchdog named Tock. And that’s just a bit! It would take way too long to type out the plot, so we’re taking the short version.

Basically this introverted and very bored kid named Milo gets a purple tollbooth in the mail, is transported to the Lands Beyond, a world of imagination. There, he goes on all sorts of adventures, along with this watchdog named Tock, who is literally a watchdog. The main part of his body is a watch.

What I just typed made it sound boring. Gah. Anyway, this book is awesome and I need you to read it cause it is awesome. The letters even have tastes in the Lands Beyond!

So. That is my favorite book. And now I must get back to the evil pile of homework that is threatening to take over my life. Ta-ta!

I blog about whatever's on my mind. Usually that's stuff like Harry Potter metaposts, writing, and LGBTQ+ topics.
View all posts by Danny →
This entry was posted in 30 Day Challenge, Blogging and tagged awesomeness, Blogging Challenge, books, homework. Bookmark the permalink.